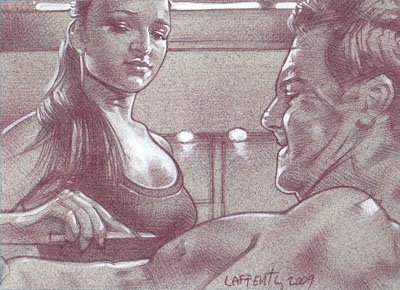 Another commission. Thanks Paul, it was fun. This one is from the Heroes television series. I’m almost embarrassed to write this, but when I took this commission I hadn’t actually seen the show. Since then I picked up the first season on disk and now I’m totally hooked.

People have been asking when is there going to be new work for sale, and the answer is soon, but not quite yet. I’ve got a mob commissions and they have to come first. Almost everyone that’s on the list now, is a collector and has bought several pieces of my work, so I owe it to them to stick with it and get their stuff done.

New prints are going up almost daily, so hopefully that will hold everyone over till I’m finished. I also wanted to say thanks to everybody getting commissions done, or buying my work. You guys (and girls) are allowing me to do what I want to do, and I really appreciate that..
Jeff